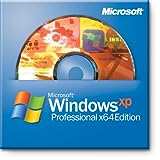 Please note: This OEM software is intended for system builders only and cannot be transferred to another PC once it is installed. The purchaser of this software is required to comply with the terms of the System Builder license, including the responsibility of providing all end-user support for the software.

With Windows XP Professional Edition with Service Pack 2, you get safer browsing and communication, powerful security tools, and improved experiences. Windows XP is the operating system release that unifies the Microsoft range, with all the desktop versions now built on the NT/2000 code base rather than the shakier foundation of Windows 95, 98, and Me. That makes XP a great upgrade for users of the now-obsolete 9x and Me line, but for those already on Windows 2000 Professional it is a closer call. Despite the similar name, there is no special synergy between Windows XP and Office XP, which works fine on Windows 2000.

For Web browsing, XP comes with Internet Explorer 6.0. The enhancements in IE 6.0 are mainly of interest to Web developers, and in any case Microsoft makes IE freely available to all Windows users. Although Java is not installed by default, it is not difficult to download a Java Virtual Machine (JVM). Windows Messenger, originally a chat client, has evolved into a collaboration tool that allows for video conferencing and application sharing.

The XP user interface is not a radical departure from earlier versions of Windows, but there are a number of small changes that together add up to a significant improvement. The Start menu now automatically features the most frequently used programs at the top of the list, and you can add and remove shortcuts by right-clicking the icon and selecting Pin or Unpin from the pop-up menu. Windows online help is integrated into a Help and Support Center that works like an internal Web site, with searchable help, tutorials, and walk-throughs.

Windows XP Professional includes all the features of Windows XP Home, and adds support for dual processors, encryptable file systems, offline folders, the Remote Desktop as described above, and extra administration features that come into play when connected to a Windows server domain. XP is demanding on hardware, and it would be a mistake to install it on less than Microsoft’s recommended minimum requirements. There is also activation to consider, a mildly annoying anti-piracy measure that requires you to obtain a code from Microsoft for full installation, and in the future if you reinstall or make major system changes.